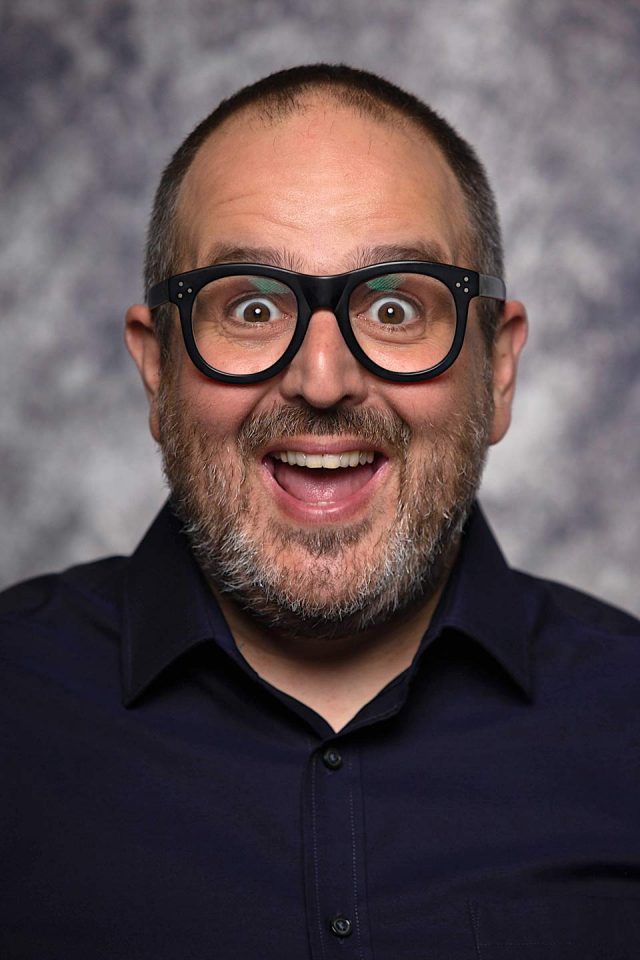 Comedian. Actor. Dog Walker. Parent. Sometimes on your telly, never on your drive. Has own teeth and is left-handed. Undercover Vegan.

As seen on Richard Osman’s House of Games, Qi, Live At The Apollo, Peter Kay’s Phoenix Nights, 8 Out of 10 Cats, Alan Davies: As Yet Untitled, Celebrity Mastermind and Coronation Street. Series regular on The News Quiz, The Premier League Show and 5Live’s Fighting Talk.

Justin brought back tiger-faced Young Kenny for the record-breaking run of Phoenix Nights Live at The Manchester Arena, which raised over £5 million for comic relief; told fantastic tales about Australia and Manchester on Live At The Apollo; won The Champion of Champions on BBC 5Live’s Fighting Talk; and appeared as Dean the rival cricketing landlord on Coronation Street. All this as well as helming his own critically acclaimed podcast About 30 Minutes, No More Than 45.

His comedy has taken him on tour to Australia, China, Japan and the Middle East. He has performed stand up comedy on television a number of times including, several series of The Comedy Store (Comedy Central), One Night Stand (Dave) and was Michael McIntyre’s guest on his Blackpool leg of Comedy Roadshow (BBC1).

Other TV/ Film credits include; Alan Davies: As Yet Untitled, Ken Loach’s Looking for Eric, Max and Paddy’s Road To No-Where, Shameless, and he was a winner of Celebrity Mastermind with Les Dawson as he specialist subject.

Justin is an experiences radio presenter, having shows on BBC Manchester and before that he was on Key 103 for over a decade. He’s written and starred in two series of his own Radio 4 sitcom Everyone Quite Likes Justin and often pops up on The News Quiz on Radio 4, and TalkSPORT, as well as contributing regularly to both Shaun Keaveny’s breakfast show and Radcliffe and Maconie in the afternoons both on 6 Music. Justin’s podcast – About 30 minutes never more than 45 can be downloaded for various platforms here. He has recently released the 100th episode and it has been downloaded over a million times.

Justin regularly performs at private and corporate events, including company awards, AGMs, Christmas/ end of year parties, weddings and birthdays. He is available for both after dinner comedy sets and as a host. Justin is particularly in demand as an awards host, his cheeky, irreverent yet professional approach proving a popular fit for bookers and audiences all over the UK and internationally.

Justin has also worked on branded TV and online campaigns for MUTV, O2 and DFS. In August 2016, he presented the Rio Olympics for Team GB and DFS.