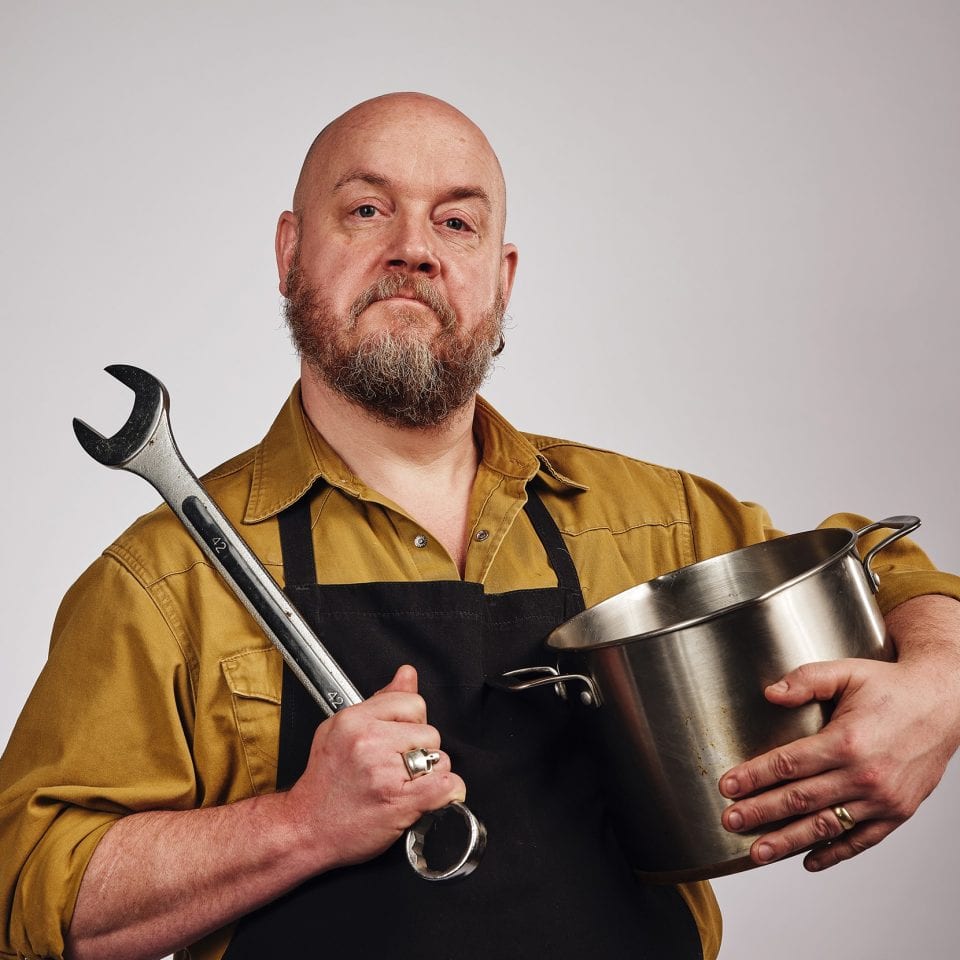 Funny, inspiring and absurd this stand-up comedian and anarchic chef presents a show that’s as much a comedy set as it is an illustrated lecture. He makes food onstage using unexpected equipment and unconventional methods. And he makes you laugh.

George has appeared (and cooked) on Channels 4’s ‘Bake Off: An Extra Slice’, ITV’s ‘This Morning’ and BBC Radio 4’s ‘Loose Ends’. George also presented an episode of BBC Radio 4’s ‘The Food Programme’ which was recorded at The Edinburgh Fringe 2019.

In 2015 George took his debut solo show ‘ANARCHIST COOK’, a guide on how to cook in a hotel room, to the Edinburgh Festival. It was a total sell out, it won the SPIRIT OF THE FRINGE AWARD and was followed by a two-year tour. In 2017 George returned to Edinburgh with his second show ‘DIY CHEF’ where this time he cooked in a shed using power tools. It was another sell out and the springboard for a second twenty month-long tour. 2019 saw George back with a third comedy cooking show, ‘MOVABLE FEAST’ – a guide to cooking with cars, on trains and in planes.

A gregarious chap, George has been a guest on numerous podcasts including ‘A Glass With… with Olly Smith’, ‘Jason Manford’s Absolute Radio podcast’ and ‘Richard Herring’s Leicester Square Theatre Podcast’ to name a few. George’s online presence has also seen him create and present a series of advertisements for Vauxhall and On The Tools in which he drove a van around the country cooking food using power tools for builders and factory workers.

George’s skills as a presenter, speaker and comedian with a wholly unique angle have seen him excel at corporate events for such clients as innovation company !WhatIf?, Roche Pharmaceuticals, UCL and BCI.

In addition to his solo comedy/cooking shows George has been a sought-after stand-up comedian for the last two decades taking his brand of far-reaching humour as far as New Zealand, Hong Kong and even India.

"it is refreshing to encounter a performer who really is unique"

"a genius… he is the friendly face of anarchy, the anarchic face of food and the foodie face of comedy"

"my find of The Fringe"

“a culinary Bill Bailey, with chopping boards instead of keyboards. It is a multi-sensory delight to spend an hour with him”

Grace Dent in The Guardian